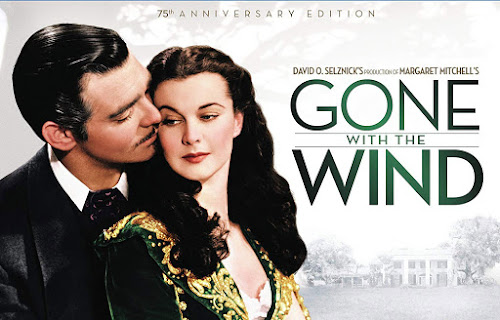 What can you say about "  Gone with the Wind  " that hasn't already been said?
Gone With the Wind ... And there we were spellbound ...

What is an immeasurable film and a masterpiece of cinema?

That the love story between Rhett and Scarlett made us all sigh?

Or that we would see her again, despite having done so many times and we would be glued to the TV for three hours and with an «aiinnsss» face ...?

There would be so many and so many data to tell, so many anecdotes to explain, from the shooting, its characters or the film itself, which are also surely already known, that we would not finish.

With which I am going to choose to focus on the purely personal opinions and feelings, which it aroused in me, without going into technical considerations, of which I am not too friendly and much less understood.

The Clark Gable and Vivien Leigh couple is simply magnificent. The chemistry and sparks that are given off from both when they are together, scorch the atmosphere.

Scarlett is young, ambitious, rebellious, frivolous, and frivolous. A proud young woman who stops at nothing to achieve her goals and fulfill her wishes. Freedom, desire and passion in its purest form. And selfishness, of course.

Rhett is an unusual gentleman from the South, strong and also used to achieving his goals. Seductive and fascinating, it represents masculinity and conquest.

On the contrary, the character of Melania ( Olivia de Havilland ) despite being very well played ends up being excessively "exhausting" if we compare it with Scarlett's.

Exactly the same happens with the male characters.
In the face of Rhett's gallantry, manliness and packaging, Ashley is smooth, polite and soft.

While the first suffers from an innate and refreshing gallantry, the other will take us to a haven of boring peace.

These sweet / sour contrasts help to further emphasize the character differences between them.

And while the lives of all of them are passing before our eyes, history will take us by the hand through time and will make us grow with all of them.

In the " Twelve Oaks " we will feel the spite of the young Scarlett that we have known in the omnipresent "Tara."
But we will not understand, perhaps, his obsession with the fine and correct Ashley, unless we already know the capricious and energetic character that the "young lady" has. You want what you can't have, and it makes you want it even more that you can't get it.

And we'll see handsome Rhett come out from behind a couch dodging a vase and we'll start to fall in love with him a bit.
The impassive Butler will be dazzled by the character and beauty of the young southern woman.

And when she makes her first mistake with the young blond suitor, we'll start to roll our eyes at her attitude. We still have a few left ...

And Melania will appear, all goodness and honesty, which will make Scarlett seem even more frivolous and superficial. And I will continue to stay with the fickle young woman, knowing that her rebellion hides a great heart. Only she doesn't know yet.

And little by little, the film will introduce us, even without realizing it, into the history of the four…. Increasingly…

And the war will come, with its pain and destruction and the lives of the characters will continue to advance in leaps or stumbles, it depends on how capricious it is with each one of them.

And all of them will mature and grow, each in their own way (except Melania… Melania was always, always mature…) and we will continue to sit with those glued to the screen.

Until arriving at the famous scene of an almost defeated Scarlett, whose silhouette is outlined against the sunset, with her fist raised and asking God to be a witness of her determination.

From there, it seems that another movie begins. Actually, we have entered another story ...

Scarlett will become a cold and calculating woman and new characters will appear, still maintaining some of the previous ones, which will enrich the story.

We will suffer with her and Rhett before the terrible tragedy that will strike their lives and we will mourn their irreparable loss.

And we will still not understand that insane obfuscation by the fluffy and mushy Ashley. The truth, this girl does not learn ...

And when we get to the agonizing and dramatic finale, we will feel that we are still wanting so much more and we will be left stunned and dissatisfied with the outcome.

This time The End has caught us off guard.

But hey…
"We'll think about it tomorrow!"